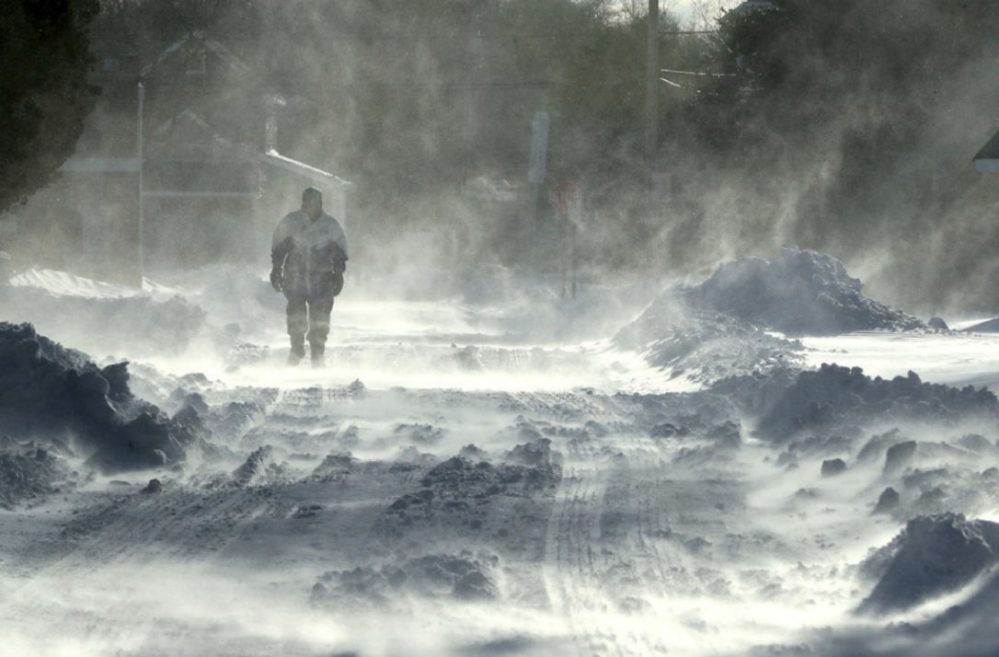 “Now is the winter of our discontent,

Made glorious summer by this son of York”

This Advent Season is pregnant both with expectation of the birth of Christ and with the fearful expectation of great dysfunctions to come. In almost every major area, we have had greater and more intense periods of local crisis, but I am hard put to find a time when all areas of stability were under assault in every corner of the globe simultaneously. This is what I expect to be writing about over the next year. Navigating these precarious waters will require all our heart, mind, spirit and faith in an unprecedented way. I have a sense that this will be a battle unlike any we have ever seen before.

The Christian season of Advent is the proper time to square up to it, for Advent is a time of penitence, joy and, above all, hope. Penitence for the sinful things we have done and the noble things we have failed to do; joy for the certainty that despite what we have been, God sends us a Savior anyway; and hope that the Savior will dwell among us and all things will be set to right. This begins with our firm resolve to set ourselves to right in preparation for our Savior.

I begin this season with a quick survey of the major areas of stability that occupy my mind; how those foundations have become so much sand, and how to prepare to make them rock again. Remember, as you consider, that Christian hope is forged and proven (as Fr. Paul Scalia notes) in the most difficult and challenging times, not the easiest.

Church: I am horrified by the mass moral chaos emanating from the Vatican; the rank betrayal of Catholics in China, the protection and promotion of predators in the ranks of clerics, the sustained assault on the teachings of Christ by many of those whose covenanted vocation is to defend and promote those teachings, the financial corruption that is endemic to the Vatican finance system – where only those who attempt to expose and reform it are ruthlessly punished. It is a deep sorrow to me that the Church I love has become a cradle of corruption. Even so, a Rubicon was crossed for me with the Pachamama blasphemy. While I do not believe the Pope or the Bishops involved were actually worshipping this pagan idol, the Pope’s comments later proved they knew what it was and were consenting to its presence at Catholic worship – directly defying our Founder, Jesus Christ. That was an open declaration of war on Christ. All to be hoped for now is conversion or the remedy of Psalm 109:8.

Family: Homosexual activism and the transgender movement are a direct assault on God and reality, cloaked under the pretense of fairness and tolerance. In the beginning, God created man in His own image; male and female He created them. You can look it up in the first chapter of Genesis. The beginning, as it were. The practical reality is that every society that failed to put a premium on family formation has been a society hurtling towards its own destruction. There are many that have taken this destructive path: I can’t think of one which has checked it once it began its fatal course. But I have hope.

Politics: I sometimes wonder how relevant traditional politics is right now. But taking heed of Christ’s comments at the Baptism at the Jordan, that all righteousness be fulfilled (Matthew 3:13-15), I soldier on. Everything is in flux. The suburbs have collapsed for Republicans. So far, explanations for this phenomenon have been like a Rorschach which every commenter uses to bolster his own previous enthusiasms. Some say it is a negative reaction to Donald Trump’s combative style, others that it is a result of the influx of leftists escaping from the inner cities or leftist states they have already ruined – without learning that it is their policies that caused the ruin. Yet there is little hard data being used to explain the phenomenon so far. Minorities are moving dramatically towards Trump. There is an abundance of hard data for that. It seems the only people who think Trump is a racist are white liberals who don’t have to suffer the consequences of the policies they impose on those they are “helping.” Never Trump Republicans maintain that GOP losses are due to Trump. There are some important GOP losses, but I can’t help noticing that almost all of the GOP types that are losing are the weenie Republicans who oppose both him and his agenda. It looks to me like the establishment GOP “smart” set is actually “notso.” We are seeing a gargantuan shift right now that is extremely complicated. I am analyzing trends and data very closely – and will provide some advice, both here and professionally, on how to use those trends to champion traditional Christian Americanism effectively. I expect only a few professional pols to take up that advice, for we are at a moment when we must think anew and act anew, as Abraham Lincoln advised in his first State of the Union – but politicians rarely even consider anything outside the old ways until they are in the midst of a crisis as grave as that Lincoln faced.

Government: The impeachment fiasco is, improbably, highlighting many of the great problems in government. It illustrates the collapse of objective standards of justice, gives palpable examples of a bureaucratic class that contemptuously rules over the sovereign people rather than serves it, and exposes both an establishment media and a political party which have abandoned all standards save those that are rankly partisan and malicious. One of the most important modern dysfunctions is the activist judiciary, which routinely usurps both legislative and executive authority. The judiciary is NOT the supreme branch of government, but merely a co-equal one. I take some satisfaction in seeing this coming to a head, as I was sounding the alarm about it loudly during the early 90’s when I was doing radio. Now it is so obvious almost anyone can perceive it. I suspect a surprise in the next year will be the exposure of widespread pockets of actual judicial corruption – with some judges sitting before the dockets they once presided over.

Society: We face a blizzard of offenses that pervert everything, including the very language we use to communicate with each other. In New York, it is now illegal to call illegal aliens, “illegal aliens.” They are to be called “undocumented immigrants.” You are not an immigrant unless you have gone through the immigration process, which involves documentation. To call someone who never sought documents “undocumented” is akin to calling a man who murdered his parents a “poor orphan.” The most ardent advocates for socialism proclaim the formation of police departments or the building of roads as a type of socialism – confusing those forms of collective action limited by the principle of subsidiarity in a free society with the comprehensive collective rule of socialism. They think if a little collectivism is good, a ton of it must be better. Actually, we require a little arsenic in our diet, just as we require a little collective action in any society. Consume a lot of either and death will soon follow. We don’t understand why the foundational principles of America created the freest, most prosperous, most generous, and most successful nation in world history, offering opportunity to all who would take it. In fact, the idiots who have seized the positions of power in literature, the universities, the media and arts are actively trying to destroy it, knowing not what they would destroy, why it worked in the first place, and why what they seek to erect in its place would destroy them, too. And these ignorant vandals consider themselves enlightened geniuses. I will continue and dramatically expand my series of “Precepts of a Reasonable Man” in the coming year – not so much to check the progress of the new dark ages we have entered as to offer a framework for renewal.

Culture: In this last year, we have had testimony under oath that when a baby is scheduled for abortion is born alive, it often goes to “procurement” and is killed by cutting its heart out to facilitate the illegal trafficking in baby body parts for profit. That testimony has come from some of the people who actually commit these horrors. The establishment media has largely blacked out that news. One judge who presided over a trial in which such testimony was given instructed the jury that the criminality of the abortionists is irrelevant. As we end the year, some progress is being made BUT the fact is we are butchering live, born babies and selling their organs for profit – and subsidizing all this with our tax dollars. Where is the tide of outrage that would surely come if we had any vestige of morality or compassion? And the people who most vigorously promote this mass slaughter presume to lecture the rest of us on morality?! I fear that the Lord may require that every drop of blood drawn by the abortionists’ knife be repaid with another drawn by a sword. Maranatha!

Global Affairs: The greatest shock, when surveying the world scene, is that the United States is probably still the least degraded of all the decadent nations on the globe. Mexico is a failed state on our southern border, increasingly dominated by drug cartels. Western Europe is now occupied by radical Islamic invaders, its leaders having facilitated the invasion themselves. Even England is no longer a free nation, but one where you can be jailed for voicing the wrong opinion – and where the police restlessly watch opinions on social media while studiously avoiding the violent crime that besets this gunless society. Venezuela shows the toxic fruits of socialism even in a once-wealthy country and threatens to export its madness throughout South America. China, besides oppressing and murdering its own people, maliciously seeks to establish itself as global hegemon. Much of Africa is mired in poverty and grappling with the various “isms” that so afflicted the western world over the last century. Russia is a fragile state that largely survives through bluff and bluster – and the vestiges of military might. Need I speak of the Middle East at all? When I was young, we would sometimes speak of a region as being a powder keg while preparing to deal with it. Now it is nothing but powder kegs as far as the eye can see. One would have to be particularly doe-eyed to survey all this and expect no explosions to come.

These are the things I will focus on as we go forward into another year. This truly is become the winter of our discontent. Yet we are Christians. As such, we know, on the darkest night of the year, that this bitter winter will be made glorious summer by the Son of Man. Our challenge is how to cooperate with Him in the regeneration.

193 thoughts on “The Season Begins”