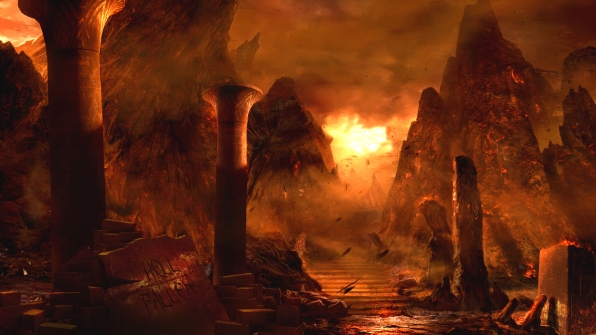 It was distressing, as we entered the Triduum, for yet another eruption from the Vatican as it was reported that the Pope had told one of his favorite journalists, the Italian atheist Eugenio Scalfari, that there is no hell – in complete contradiction of Catholic doctrine. The Vatican quickly replied that that was not a fully accurate transmission of what the Pope meant. I don’t know. Certainly, it has been demoralizing for many faithful Catholics to hear, on a regular basis, comments from the Pope that seem to contradict settled doctrine. Many faithful Catholics have come to feel like the beleaguered parents of the neighborhood hellion: constantly and weepily assuring authorities that their boy really has a good heart at bottom.

It wearies me as much as anyone. The forlorn silver lining I see is that all this may wean faithful Catholics away from ‘papolatry,’ the errant belief that every word that drops from a sitting Pope’s mouth is golden. The Pope is due the filial respect and affection of all the faithful, but he is only authoritative when he speaks on matters of faith and morals – and that authority is only binding when he formally speaks Magisterially. Even then, except on the rare occasions when he formally speaks infallibly on a matter of concern for the whole Church, his decisions are subject to the informed consent of the world’s College of Bishops. Unless there are specific objections, that consent is usually implicit. He has no authority flowing from his office on general matters of politics, economics, science or other temporal matters (with the exception of the condemnation of means that are illicit in themselves). His only specific political authority is as temporal head of the Vatican State. The silver lining is that these controversies may lead some of the most faithful Catholics to cease ceding their legitimate temporal responsibility to the Pope, while perhaps it may lead some who are not orthodox to recognize the legitimate formal spiritual authority of the Pope on matters of faith and morals.

We have had a long run of Popes notable for their orthodoxy and for their reasonably refined – and restrained – commentary on purely political and temporal matters. Yet God does not need a vicar to be particularly refined or disciplined to protect and grow His Church. At all times, in all ages, since Christ took on our humanity and died for us, destroying the power of death by His Resurrection, which we celebrate this weekend, nothing can prevent the faithful from worshiping the Person of Christ with faith, fidelity and fortitude. It is, perhaps, a very good thing that we all should be shaken from our complacency; forced to balance our duty of filial obedience with our duty of faithful fidelity to the Gospel passed on with authority from the Apostles.

I doubt we have seen the end of strange statements emanating from Rome that give scandal to much of the faithful. I miss the days when the question atop this article was more obviously rhetorical. Yet in all things, God has His purposes, even when the intention is obscure to our eyes, when we can only see as through a glass, darkly. So I continue to regard the Pope with filial devotion, even when I wonder what, in heaven’s name, he is thinking. And I will continue to offer the third decade of every Mystery on his behalf and in submission to his legitimate spiritual authority. The story is not finished, yet – and tonight, the Light of the World rises anew in our sight.